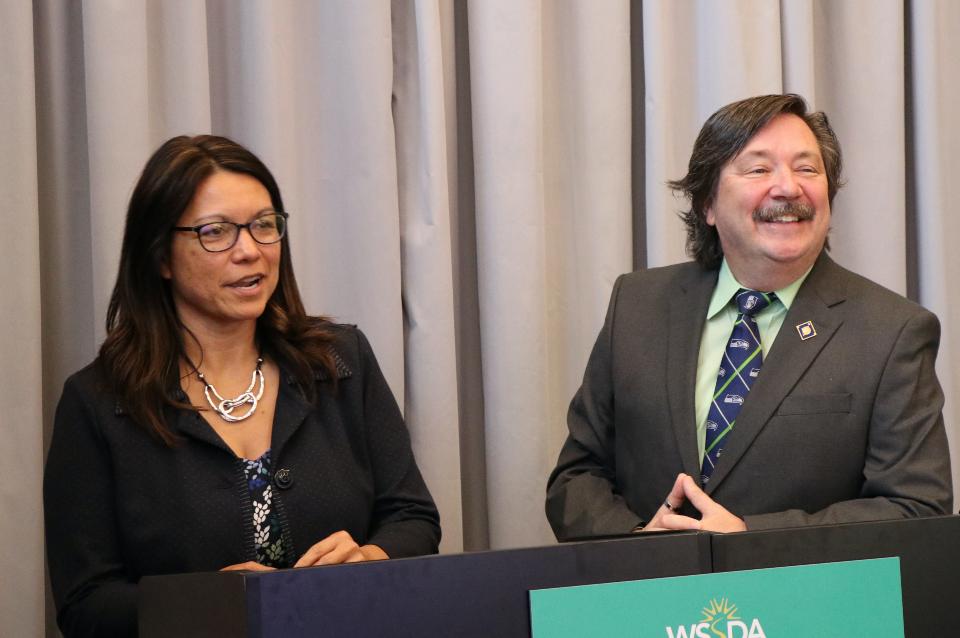 On September 30 and October 1, school directors statewide participated in the Washington State School Directors’ Association’s (WSSDA’s) annual General Assembly. Directors discussed the pros and cons of over 70 different proposals for adding, subtracting, and updating the contents of WSSDA’s legislative and permanent positions.

Referring to the first day of the assembly, Woodland school board member Trish Huddleston said, “I honestly can’t believe how much I enjoyed that. It was a long day but fun, intense, and exciting too.”

The assembly is a methodical march, governed by Robert’s Rules of Order, through proposals submitted by school directors for updating WSSDA’s advocacy platform and supporting beliefs and values. A set amount of time is dedicated to delegates wishing to speak for or against each proposal, along with opportunities to ask clarifying questions. Then, once discussion is complete, the assembly votes to adopt or reject a proposal.

“A clear effort was made to give participants time to signal their desire to speak,” said Bellevue school board member Christine Chew. “Answers to rules questions were thoughtfully and efficiently addressed. It was both efficient and inclusive.

The next step for school directors is to tell WSSDA which of its legislative positions should be the highest priority for advocacy efforts in 2023. Board chairs, General Assembly delegates, and board legislative representatives were emailed a form to submit their board’s recommendations.

Once submissions are tallied, WSSDA will create a one-page priorities document that will drive legislative advocacy efforts next year.

The opportunity to update WSSDA’s platform will return next spring during the annual platform revision window. Learn more about the assembly at wssda.org/GA.

In recent years, the assembly has been held virtually, broadcast from the WSSDA offices. Each workstation has its own function (or group of functions). Voting management, Zoom screens, the publishing of virtual green and red cards to signify sentiment, and many more operations are divvied up between multiple staff and screens. Collectively, they orchestrate the broadcast seen by delegates and audience members.

One key role not pictured below is the parliamentarian advisory committee (PAC). This group is comprised of three school directors noted for the depth of their knowledge of Robert’s Rules of Order. They assist if a particularly unusual procedural question arises by consulting with WSSDA’s policy and legal services director and/or WSSDA’s president, who is the presiding officer for the assembly. The “pac,” as they’re informally called, remains on call via Zoom throughout General Assembly.