State Laws and WSSDA Positions—Comparing How they Come to Be 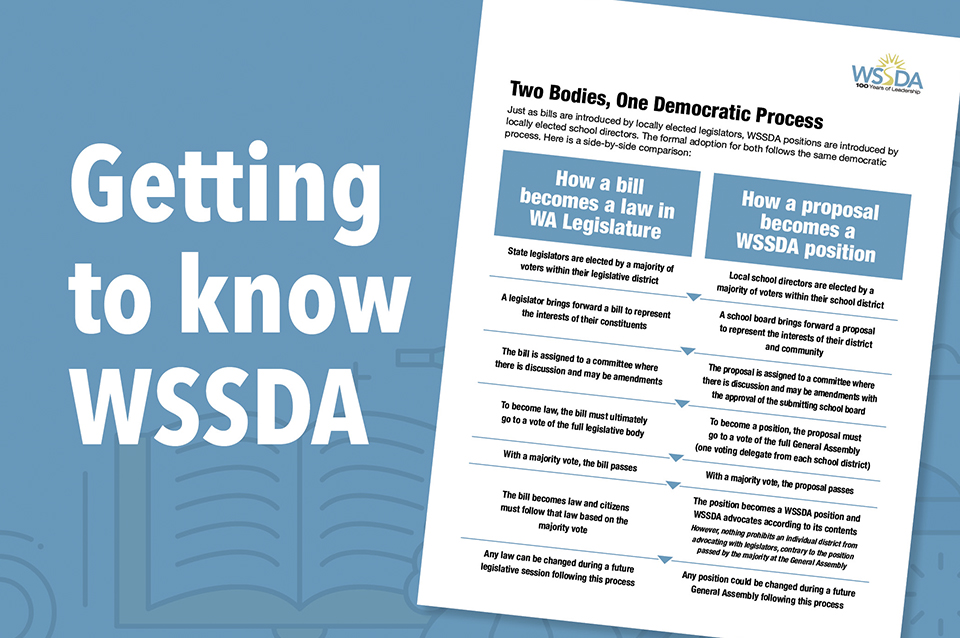 Who remembers the catchy song ‘I’m Just a Bill’ from the beloved Schoolhouse Rock?

Describing how a bill comes to be, this song outlines the process in which a bill is signed into law. WSSDA proposals follow a similar process on their way to becoming positions, albeit the steps are on a smaller scale. This document provides a side-by-side comparison.

But first, what is a WSSDA Position?

The legislative and permanent positions, together with the bylaws and operating policies, form the governing foundations of WSSDA. WSSDA as an organization, and thus its positions, hold no regulatory authority. Instead, the positions help frame the work of WSSDA staff and act as supports to school boards.

Legislative positions are WSSDA’s calls to action directed at the state Legislature. These member-ratified positions define and direct the work of WSSDA’s staff as they engage with legislators in Olympia to support public education. The legislative positions also serve to strengthen the advocacy of school boards whose priorities are aligned with the member-adopted positions.

Permanent positions represent WSSDA’s beliefs and values and indicate WSSDA’s stance on issues of widespread concern for its membership. The permanent positions are advisory to individual school boards and the greater community.

How are positions passed?

Finally, the proposal’s journey reaches the most important step: it goes up for a vote at the WSSDA General Assembly.

What is the General Assembly?

General Assembly is one of the most important school board events of the year. By voting on legislative and permanent positions, the assembly is where school directors update WSSDA’s advocacy platform. Once all voting is finished and positions adopted, the platform that results will guide all of WSSDA’s advocacy efforts until the next assembly.

General Assembly is free and open to all school board members. However, casting votes and addressing the assembly are limited to one member of each board acting as a delegate. Learn more about how that works on the Voting and Addressing the Assembly webpage.

WSSDA belongs to its members, and this is the best chance for each district to have their voices heard.

For more information and to see the positions up for a vote during the 2022 event, please visit wssda.org/GA.

All the proposals that pass with a majority vote become positions. WSSDA advocates according to their contents. An important note here: nothing prohibits an individual district from advocating with legislators contrary to any position passed by the majority at General Assembly.

Again, WSSDA has no authority over others and is not a regulatory agency. School boards can re-examine WSSDA’s positions and propose amendments, removals, or the addition of new positions each spring. Through this yearlong democratic cycle, WSSDA’s platform is updated annually.